The songs of welcome have changed in Maiduguri for President Muhammadu Buhari, from being friendly and warm to being undisguisedly hostile. Angry crowd welcomes Buhari.

Read Also: Opinion: My theory: Boko Haram is an enterprise by Fredrick Nwabufo

According to video published online on Wednesday, as the President’s convoy blitzed through the streets of the Boko Haram threatened city, the crowd that lined the streets shouted “Bama so”, Bama so”, which means “We Don’t want you”.

In the past, Buhari was received with chants of ‘Sai Buhari’.

The reason for the anger was because of recent attacks by the Boko Haram against communities and the one that incensed them the most was the killing on Sunday of commuters stranded overnight in the town of Auno, because soldiers locked their vehicles out from reaching the safer city of Maiduguri. Angry crowd welcomes Buhari.

Buhari being received by Governor Zulum

In the night, Boko Haram came on the attack, by blasting a fuel tanker in the queue, setting off a fire that killed 30 people, including two female students of the University of Maiduguri.

Dozens of women and children were also reportedly abducted by the Boko Haram.

President Buhari was in Ethiopia when the tragedy occurred and he only offered sops as usual and promises to rescue the abducted.

On his return to Nigeria, Buhari went to Maiduguri to condole with the government and people over the latest Boko Haram-induced tragedy. The people appeared to be tired of all excuses.

Shehu Zubair first shared clips of the angry crowd and hoped that it will teach Buhari to have an overhauled strategy in fighting Boko Haram:

Buhari, Never thought he will receive this kind of treatment in the core north. Just an opposite of his earlier Visits.

Good people of Borno are chanting for BUHARI; “Bama so!” “Bamayi!” Meaning: we don’t want-we don’t.

This is really serious. 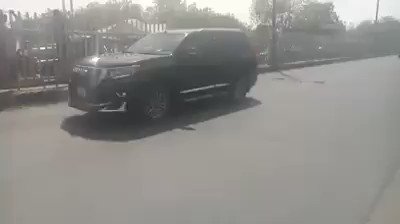 128 people are talking about this

Paul Carsten, a Reuters correspondent, who had covered the insurgency for the past three years remarked: “Incredible that people lined streets of city of Maiduguri to boo Nigeria’s President Buhari when he visited in response to killing of 30+ people by Islamist insurgents (Boko Haram or Islamic State West Africa). Not seen anything like it in 3+ years of covering the conflict”.

Abdulrahman Leme, a.k.a Abu Rayyan also remarked: “Buhari getting booed in Maiduguri is instructive. If this doesn’t push for a more drastic and decisive move in rejiggering our security architecture, it should at least worry the APC brand. If PMB can be booed in Maiduguri I wonder how they intend to sell anyone going forward.”

And Yakaka Madara contrasted the security around Maiduguri, with the norm for residents: “Helicopters flying , roads lined with security personnel almost every meter. All major roads closed . All for the safety of one person . If only same type of security would be deployed to protect thousands” .

0
Ahmad Lawan, the President of the Senate, on Thursday, accused the Federal Ministry of Health of not putting serious measures in place to...
Read more

0
Gov. Abdullahi Ganduje of Kano State, on Thursday, said the state government has earmarked N500 million for construction of the first phase of...
Read more